Predator Pest Solutions are specialists in rabbit pest control and management. If you would like a free no obligation quote, please call us on 0800 112 3480 or fill in the form on the right. 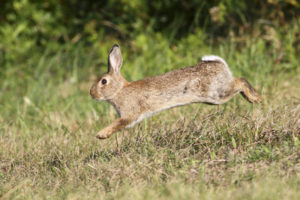 The European rabbit (Orytolagus cuniculus) is a common sight across the rural landscapes of the UK. Rabbits are believed to have been introduced to Britain by the Normans who kept them in large pens and harvested them for meat and fur, it is also believed that many of these rabbits escaped the pens or were intentionally released, ultimately becoming the wild species that we see today.

Rabbits are easy to identify due to their greyish brown pelts (although black and gingery rabbits can also appear), white fluffy tail and long ears without black tips (unlike brown hares). Rabbits have adapted well to their environment and can quickly populate an area as they breed all year round, have up to 6 litters a year, with each litter containing 4 – 6 kits. Rabbits do have natural predators such as birds of prey, foxes, stoats and even badgers, however the population of rabbits is still able to increase rapidly in certain environments.

Large rabbit populations can cause frustration for many households and businesses across the UK, in urban areas rabbits can wreak havoc in gardens, bowling greens, golf courses and sports fields. Due to the burrowing behaviour of rabbits, excessive damage can be caused to properties and in extreme cases can lead to the collapse of structures or foundation integrity. Rabbits also have a detrimental effect in more rural areas including agricultural land, livestock/livery yards and riding schools.

Large populations of rabbits on agricultural land can cause devastating damage to crops, woodland and game cover, due to their feeding and burrowing behaviours. This is also true for agricultural livestock fields, livery yards and riding schools, as burrowing in these areas can result in livestock or equine injures due to falling into the entrance of a burrow. These agricultural affects can be very costly to the people involved and as a result, effective rabbit management is advised to prevent these incidents.

Our rabbit management team have many years’ experience in dealing with large rabbit populations, reducing many populations down to a sustainable level. There are many different management options that can be used and can be tailored to the needs of our clients and the land. We promote ethical management to the population to achieve a healthy, sustainable population of rabbits reducing damage to properties and reducing the number of rabbits infected with Myxomatosis.

If you have a rabbit pest control issue: