Predator Pest Solutions are specialists in treating spider infestations. If you would like a free no obligation quote, please call us on 0800 112 3480 or fill in the form on the right. 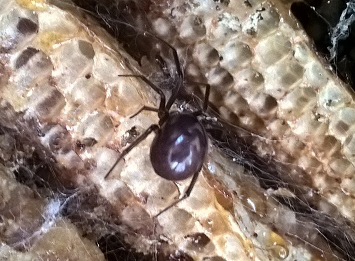 False Widow spiders belong to a group of spiders which are part of the same family as the infamous Black Widow spider, although they are nowhere near as toxic. There are seven species of false widow spider in the UK. Four are native, two are accidental introductions and one is frequently imported but not currently established. Adult False Widow spiders have a dark shiny body, with the abdomen having some pale markings on the top with a creamy coloured band all around the front. Females are larger than the smaller male, measuring around 20-32mm compared to the male at 16-22mm. In general, the life cycle lasts about 1-2 years and the females usually live longer than the males. Their eggs are white, spherical egg-sacks and are produced at intervals, with their number depending on the food supply. The eggs hatch within 2-4 months.

False Widow spider webs are a tangled scaffold of silk, usually found in houses and out buildings, with the spiders usually confined to a crack or crevice in the wall or similar structure. They feed on flies and other small insects. The False Widow spider is not a particularly aggressive spider, but it can bite if mishandled or provoked. People who have experienced the bite say it’s similar to a bee sting, although medical help should be sought if symptoms continue.

Where spiders require controlling, this is usually achieved by physical collection and web destruction by vacuuming, but this may not be suitable with species such as the False Widow spider. In such instances, control may be achieved by the use of an HSE approved insecticidal spray. However, some public health pesticides may not be approved for use in external garden areas, or may not affect spiders. All our insecticide treatments are HSE approved and it is safe to return to and use the rooms that have been treated after a few hours. If you have pets, keep them out of the affected area for at least 24 hours.

In most situations it normally takes up to 60 minutes for our technician to complete their risk assessment, the required treatment and to brief the customer on the actions taken and next steps, but this can be extended if the infestation is in numerous areas or other hazardous conditions exist. The areas treated should not be cleaned or vacuumed for 14 days.

Once completed, the infestation should start to die off, but our technician can return after 14 days if the infestation requires a further visit to your property. Some False Widow spider infestations, especially those in commercial or multi-occupancy buildings may require additional visits to eradicate all activity.

Largest spider in the UK, growing up to 14cm. Reddish brown, but young spiders can be much paler up to their last moult. They live mostly in buildings or walls. Bites are rare, and painless. Legend has it that Cardinal Thomas Woolsey was terrified by this species at Hampton Court back in the 16th century.

Adult up to 12cm wide, most commonly found in sheds and gardens. Typically dark orange, brown or beige. They do possess potent venom and can bite, but don’t usually pose a threat to humans.

Smallest in the UK growing no more than 5mm. In most cases they have grey or black bodies, although some do have distinctive markings. Usually found in low growing vegetation and piles of leaves. These spiders are considered harmless to humans.

The female is a very impressive spider 15–22mm in length. It has six eyes and its jaws are an iridescent green. The abdomen is usually almost black, but the pattern may be quite clear in immature spiders and males. This spider has been reported as producing a nasty bite which that can be painful and red, but is likely to subside after 6 hours.

If you have a False Widow Spider infestation: