Predator Pest Solutions are specialists in fox pest control. If you would like a free no obligation quote, please call us on 0800 112 3480 or fill in the form on the right. 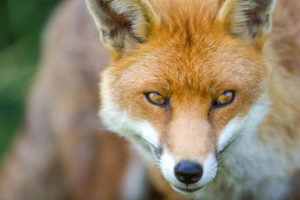 The red fox (Vulpes vulpes) is a very distinct UK mammal that can be found within both rural and urban environments. Foxes have a distinct orangey, red coat with a white chest, belly and chin. It is commonly believed that foxes are part of the canine family, when in fact they are more closely related to felines. The widespread urbanisation of the UK and relatively low fox management within the urban environment, has led to an exponential growth in fox populations.

Foxes have adapted to live within the confines of the city by changing their feeding and behaviour patterns, this has led to urban foxes becoming larger, more aggressive and brazen than their rural counterparts. The growth of the fox population in close proximity to humans brings numerous health risks, coupled with increased threats of violent attacks towards family pets such as poultry, cats and rabbits to name a few. Foxes pose problems for most urban households in the form of defecation, scavenging of bins, digging under foundations, in gardens and during the mating season (December – February), they produce high pitch screams. Both urban and rural foxes have the potential to carry parasites that can affect both humans and their pets these include:

Rural foxes are commonly a lot smaller and more timorous when compared to their urban counterparts, however these can still have detrimental effects on agriculture and associated industries. The common agricultural problems occur within well stocked poultry coops, birthing of livestock in open fields and the releasing of game birds. During the beginning of spring, the foxes will begin preparing to breed and as a result begin to hunt more aggressively to build up a surplus of food for the pregnant vixen (female fox) and her cubs. Towards the end of spring, the cubs will begin to emerge from the den with the dog fox (male fox) to learn how to survive. This starts with familiarisation to the area under the protection of the dog fox and play fighting with siblings, in which the young fox cubs will be learning hunting and fighting techniques. Soon after, the cubs become familiarised with the area and will then be shown how to hunt successfully by the dog fox. This can result in huge mortality of livestock or poultry, whilst very little to none of the killed animals will be used for food. Foxes are opportunistic hunters and will scavenge quite frequently. They often demonstrate a habit of killing animals and leaving the area, before returning a little while later to retrieve their food. Among the rural fox community, there are naturally more aggressive hunters and it pays to identify the problem fox, this is because indiscriminate removal of foxes from an area can lead to the immigration of a more aggressive fox and could result in further loss.

We use a number of fox management methods and tailor the control depending on location, damage/threat and aggression of suspected fox/foxes. Our fox management technicians have a wealth of knowledge around the topic and can allocate the right method for the fox problem that you have.

If you have a fox management issue: