Predator Pest Solutions are specialists in treating mole infestations. If you would like a free no obligation quote, please call us on 0800 112 3480 or fill in the form on the right. 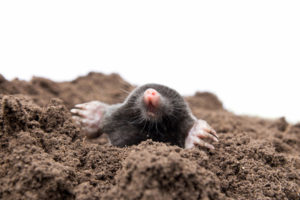 The European Mole (Talpa europaea) is native to the UK and is the only pest species that has not been introduced by humans. They can move up to 18kg of soil an hour and often create a complex burrowing network in the search of shelter and food sources such as worms. Moles spend most of their time underground and as a result, it is commonly believed that they have very poor eyesight, however this is not true, they are just light sensitive.

Moles have many adaptations to aid in their life underground including broad shovel shaped paws to remove vast quantities of earth, specialised blood cells that allow them to survive in low oxygenated areas (typically around 6-7%) for extend periods of time, 44 teeth (the highest number of teeth for any UK mammal) including canines to defend against rival moles and thick, black fur that does not follow one direction unlike most other mammals, this gives the mole the ability to turn around quickly in its burrow.

There are an estimated 31 – 40 million moles in the UK, this number has dramatically increased over the last 10 years, due to legislation from the European Union regarding mole control methods. With such a large population of moles across the UK, conflicts with humans has become very common, this is due to the above ground mole hills that they will create when there is a labour (family of moles) present. The mole hills have the potential to destroy lawns, golf greens, flower beds and fields (for agricultural use). Mole hills can also be very dangerous in fields containing livestock or livery, this is due to the increased risk of the animals tripping in mole hills and causing damage to themselves (broken legs are common). The moles can have a positive effect on your property if their population is controlled, moles will actively seek out and eat worms and other garden pests, keeping most ornamental gardens free of other pest species.

Our management of moles seeks to reduce and control the overall population of moles in the area, using the most ethical and sustainable methods. We use legal methods of control under the Wildlife and Countryside Act 1981 and we ensure that all works are carried out as discreetly and efficiently as possible.

If you have a mole infestation: