Predator Pest Solutions are specialists in Canada geese management. If you would like a free no obligation quote, please call us on 0800 112 3480 or fill in the form on the right. 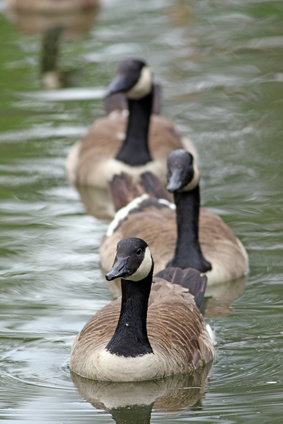 The Canada goose (Branta canadensis) is part of the Anatidae family which includes all goose species, ducks and swans. They are one of the largest goose species with a life span of up to 24 years, and can commonly weigh between 2.50kg – 6.50kg, with a wing span of up to 6 feet 1 inch. Canada geese have some distinct identifying features such as a long black neck and head, which has a white patch underneath the chin often referred to as a ‘chin strap’. Their body is covered in a greyish-brown plumage except for the chest, which is white. They have black bills and large black webbed feet to aid in swimming. Often male Canada geese are a fraction larger than their female equivalents and are generally more aggressive during the breeding season.

Canada geese were first introduced to St James’ Park by King Charles II in 1665 as part of his wildfowl collection. After escaping from the park, their population stayed low up to the 1950’s, after which time, their populations began to increase dramatically. Today there are more than 190,000 birds living within the UK, evenly distributed in all areas except for the very north of Scotland. Canada geese originated from (as the name suggests) Canada and 48 out of the 50 states of America. They are a flocking bird for most of the year, breaking off during the breeding season to pair up and produce between 6 – 8 offspring. These birds are often known to pair for life and return to the same breeding area year after year.

Canada geese are a common sight within both urban and rural areas, often staying close to water sources such as rivers, lakes and ponds. Within the urban environment Canada geese have become larger and more brazen, due to excessive feeding by the public and regular contact with humans. They can cause a large amount of damage to properties such as local playing fields, golf courses, local parks and fisheries, due to their large appetite for grass and other plants. Due to their flocking behaviour and size, Canada geese can also pose a danger to airports and runways by flying in the path of planes, with bird strikes having the potential to cause devastating consequences.

Their flocking behaviour also causes a nuisance to urban environments by loud calling, walking across roads, railways and attacking the public who come near to them (generally increased during the breeding season). Large flocks of Canada geese can often cause over grazing of land and additional issues with their digging and dusting behaviours. Their excessive excrement habits also create hygiene issues to the public, as well as slip hazards.

Within the rural and agricultural environment, Canada geese can be a nuisance causing damage to arable land, damaging wild habitats and eroding areas, generally around water sources such as lakes and ponds. As an aggressive, large sized bird, Canada geese can often bully other wildfowl species such as ducks and swans, causing them to vacate the area and not return. Crop damage on arable land due to the large Canada goose flock sizes, is believed to run into millions of pounds worth of damage each year and can cause many problems for farmers and their associates. Their guano or fouling is dangerous for several reasons, such as the risk of salmonella being transmitted to humans, other unpleasant diseases, it is corrosive and unsightly and it can cause slips due to its watery texture.

If you have a Canada geese management issue: